South Dakota could pass a bill that would require transgender students to use a bathroom based on their biological sex.
A nurse practitioner and an advocate discuss the process from medical and personal standpoints.
(Photo: kroach, Getty Images/iStockphoto)

As a family nurse practitioner, Dana Delgardo sees more than a few adult patients who never have been to a primary care physician.
Why not?

"Trans-patients face a stigma when seeking out healthcare," Delgardo said. "Visiting a medical clinic as a trans-male or trans-female patient can be a difficult thing to navigate because most health clinics are not culturally sensitive to the trans-community's needs. The clinic staff if not culturally sensitive, may address a trans person by the incorrect pronoun; if you’re not going to be respectfully addressed, you’re not going to feel comfortable.”

Delgardo has experienced this cultural insensitivity personally.
“If a patient identifies as a female their pronouns are feminine, her, and she. For instance, if your name is 'Christine,’ and the front desk staff are calling you 'David,' it is insensitive and disrespectful to the patient,” Delgardo said. “It is difficult for a trans-person to walk through the front door and sit down in a doctor’s office for care.”

Earlier this month, transgender health care in New Jersey took a step forward with the opening of an LGBT initiative at Alliance Community Health Group in Jersey City, NJ.

“The clinic’s mission is to deliver continually improved, patient focused quality of care measured by best practices in clinical performance, for all who seek and utilize our services. Including the LGBT population,” said Delgardo, whose specialty is primary care with a trans affiliation.
“Unfortunately, due to insurance issues many trans patients pay out of pocket for health care, and that’s not fair." Delgardo said. “At the clinic we take most insurances, including Medicare and Medicaid and we will work with patients to navigate insurance issues. The center works towards providing access to care that otherwise would not be available.”

The medical side of transitioning

One of Delgardo’s jobs is to guide patients through the transition process hormonally. Though personal roads to transitioning differ, the medical process is based on guidelines developed by the World Professional Association for Transgender Health (WPATH). The initial visit starts with a screening based on the Standards of Care and an informed consent model.

One of Delgardo’s specialties is walking people through a crucial and life-changing process: transgender transitioning. It starts with a screening and an informed consent model.

“What I use to determine a patient’s capacity for informed consent is a form known as the “Aid to Capacity Evaluation," Delgardo said. "Physicians assess the decision-making capacity of their patients at every clinical encounter. It has approximately seven questions regarding patient’s ability to make an informed consent."

The second form used is the “Specific informed Consent for Hormone Therapy”.

"This written form discusses hormone replacement therapy, full medical effects and safety of hormone therapy, side effects, and adverse effects, reversible and irreversible changes in the body," Delgardo said. “I will ask the patient: Do they have an idea of what transitioning is and what the hormones will do? We talk about infertility and possibility of harvesting eggs/sperm for the future, patients are given resources. Most of the patients seen in the clinic are 18 or older; we do not provide care for children and adolescents presently."

Certain cancers could be impediments to starting hormone therapy, and patients with certain medical conditions may need to be monitored more frequently.

For those wishing to transition, the recommended criteria for hormone therapy are:

1. Persistent, well documented gender dysphoria (a state of unease).
2. Capacity to make a fully informed decision and to consent for treatment.
3. Age of majority in a given country.
4. If significant medical or mental health concerns are present, they must be reasonably well-controlled.
“Hormone therapy is pretty safe when following the guidelines developed by WPATH,” Delgardo said. “We all have hormones in our body. We’re just doing the reverse of what we were born with. We are suppressing certain hormones and increasing others to bring about certain characteristics that would make the patient feel congruent."

He added, "Unfortunately there are certain body changes that cannot be achieved via hormone therapy, this is where gender reassignment surgery comes in, and that is a whole topic in itself. HRT is not a difficult science, once you have a good understanding of the process.”

There are risks to hormone therapy. One concern is the development of blood clots with use of feminizing hormones. For masculinizing hormones there is a risk of polycythemia, which is an increased amount of red blood cells that can thicken and cause clotting.

"Although some people may go against established guidelines and undergo gender reassignment surgery before starting hormone therapy, as a practitioner I would counsel them to follow the guidelines for the best outcome,” Delgardo said.

The personal side of transitioning

Right now, Delgardo only sees trans patients who are 18 and older.

Seth Rainess works on the other end of the spectrum.
Rainess, a Monmouth County resident who grew up as woman but transitioned six or seven years ago, has written a book titled “Real Talk for Teens: Jump-Star Guide to Gender Transitioning and Beyond.”

He’s a professional speaker and counselor on the subject, but has met resistance as he tries to spread his educational message to area schools.
“The schools need this information, but for whatever reason it’s very difficult to get in and talk to people about it,” he said. “I’ve gone to four or five counties and (contacted) every superintendent, every principal. Once in a blue moon I’ll get a bite. I’d say 1-2 percent are receptive.”
The issue is not going away.

“An intermediate school I’m going to be speaking to next month has four trans kids in it,” Rainess said.
His presentations are intended for both trans kids and the adults in their lives.

“There is a tremendous need to navigate all the transgender challenges,” Rainess said. “It’s important to talk to the faculty and parents and medical professionals to educate them on what the transgender mind is thinking, and how someone navigates what’s going on internally.All these kids want to do is be themselves and be happy.’”

The suicide rate for trans youths is significantly higher---as much as 40 percent higher---than for non-trans peers, Rainess said. That adds to the urgency of his mission.

In a nutshell, this is his message to parents: “There’s only two ways it can go for a trans kid. You can get on board and take that journey with them and see your kid flourish and be happy and have a social life and do well in school. Or that kid could become depressed and possibly take their own life.”

His message to teachers: “Lend your ear and you can become an ally. You can help these kids. Because maybe one of those teachers in that school, could be the only one to support that kid; possibly the difference between life and death.”

His message to administrators: “One big thing right now is bathroom and locker room issues. If you think about it with a little common sense, trans kids are not going to walk into a bathroom or locker room and expose themselves. They’re not exhibitionists. They’re going to the bathroom and doing what everyone else does. Because of a lack of education, people panic.”

Rainess had something else to add.
“Now kids have access to other trans kids (via the internet) which is good. They can talk to each other and say, ‘I’m not the only one with that feeling,’” Rainess said. “But they also see that there are hormones they can be taking and surgeries and think, ‘Hey, I can finally be myself.’ If a child sees that and can’t have it, and has no support, they may feel boxed into a corner and they may try to take their own life because they see no way out.”

Alliance's Delgardo thinks medical access finally is opening up to the transgender community.
“There are universities now that provide courses for medical students on trans 101 or LGBT courses before they go out to provide medical treatment," he said. "That will help weed out the practitioners who are not cut out for this type of medical care."
For more information on the subject, Delgardo recommends the web page of the University of California’s Center of Excellence for Transgender Health.

The following definitions are fairly simple but do sometimes sound confusing. Imagine now the confusion a child must feel when they appear one way but feel another and those around them are using words and pronouns that do not match their true gender.

Transgender: A transgender person’s internal gender identity does not match their body’s biological sex (or what some may refer to as “assigned at birth” sex). “Transgender” may be used as an individual identity for someone who wishes to transition their gender socially and/or physically, but is sometimes also used as an umbrella term that encompasses those who desire physical transition (”transsexual” people) and other gender nonconforming (GNC) people, such as genderfluid and genderqueer people or cross-dressers (see definitions below).

Transsexual: “Transsexual” refers to a more specific transgender identity; when a transsexual person’s internal gender identity does not match their body’s biological sex, they wish to undertake physical measures, with the aid of hormones and/or gender confirming surgeries (sometimes referred to as “sexual reassignment surgeries” or SRS), to correct their alignment between body and mind. This term separates transsexual people from other transgender people who do not need medical intervention to feel whole.

Gender Identity: Gender identity is an inner sense of being female, male, neither, or both. By the age of 3, children often have a clear sense of either being male or female. Most the time their identity conforms to their biological sex; whether this is the case or the child is transgender, society instills in them rules about one should conform to their birth sex.

Gender expression: Gender expression is the presentation of self to others as masculine, feminine, both, or neither. Some of expression’s aspects include mannerisms or movement, dressing and grooming, and possibly certain behaviors or interests. Unfortunately, children whose gender expressions do not meet with what society feels they should be are usually mistreated. Children learn quickly how to try to fit in. However, gender nonconforming (GNC) children will likely continue to act and behave in accordance with their interests despite these attempts, and despite the consequences of running counter to what is expected of them.

Genderfluid or Genderqueer: Genderfluid or genderqueer people internally understand their gender identity as falling outside the binary construct of “male” and “female.” They may feel, and perhaps struggle to convey to others, that their gender is a mix of both, varies from day to day, is neither or beyond, or something else entirely. They may request that others refer to them with gender-neutral pronouns such as “they.”

Pansexual: Pansexual people may be sexually attracted to individuals who identify as male or female; however, they may also be attracted to those who identify as intersex, third-gender, androgynous, transsexual, or the many other sexual and gender identities.
Cross-dressing: Cross-dressing people wear clothing traditionally worn by another gender. They may vary with how completely or often they cross-dress, but are usually comfortable with their assigned biologically sex and do not wish to physically change it. 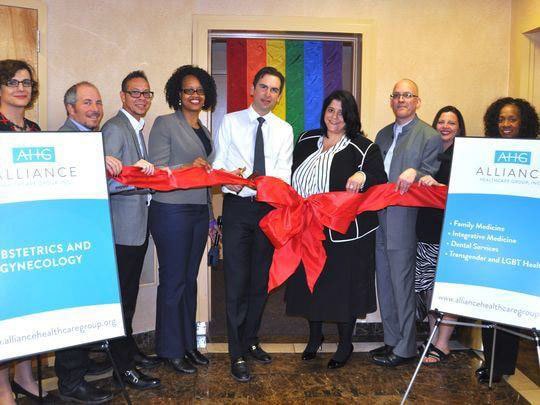