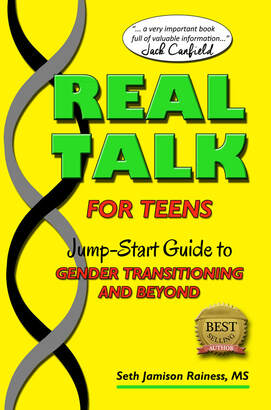 His mom called it alligator skin.

That’s the mental toughness transgender author Seth Jamison Rainess had to acquire if he wanted to make it in life.

And if his additional roles of psychologist, rehab counselor, life coach, motivational speaker, musician, computer analyst and entrepreneur are any indicators, Rainess has made something of himself. Now he wants transgender youth growing up today to know that they can make it, too.
Rainess, who lives in Monmouth County, has written “Real Talk For Teens,” a book he calls a jump-start guide to gender transitioning and beyond.

“I wrote it from the perspective — and I don’t say this often — as an older person trying to pass on experience,” Rainess said.
In the 1950s, Rainess was born a girl but at age 8 he said he knew he was a boy.

“It was many years later that I transitioned. I lived a double life, which believe me, was exhausting. When I finally got help and I transitioned, I was at peace. You can do that today, so you don’t have to live a lie,” Rainess said in a video message on his website.
When Rainess was growing up, there was no Internet and there were only two or three television channels. Information on transgender issues and gender dysphoria were hard to come by. Today, however, there is a lot of helpful information on such topics online and elsewhere. Moreover, there are currently at least four television shows dedicated to the subject.

The feeling of being in the wrong body is an adult problem that a child has to handle, Rainess said. Some children have their parents’ support; others do not. The book addresses ways to cope in both cases.

The book has two pieces. The first is a mental toolkit, and the second is an A-to-Z guide for transitioning.

In his book, Rainess teaches how to respond rather than react in situations with others. He also talks about skills and attributes such as resilience, integrity, honesty, accountability, self-confidence, having a positive attitude, and how to look at failure and success.

“And I’m tough that way,” he continued. “And people say, ‘You’re too tough.’ I go, ‘Look, do you think I got here by sitting in that corner? I got here because I had to figure out a way to carve a life.’

Rainess speaks at schools and to the medical community and also runs a support group. He teaches that it’s great to be different. Someone who has transitioned has just changed the wrapper — the person on the inside is still the same, he said.

Rainess said that everyone has challenges, and that the options are to either succumb and let those challenges take you over or to rise to the occasion and do something with your life.

When he was recuperating from his last surgery, Rainess had a realization: “I just realized I could help kids because I’m the person that survived in a time when there wasn’t anything, so what’s your excuse?”

“Real Talk for Teens" - Seth Rainess can be contacted on his website at    www.sethrainess.com.
Other resources include PFLAG Jersey Shore at www.PFLAGJerseyShore.org